Axios! The Reception of His Eminence Metropolitan Serapion

With great joy, the Diocese and her children received their newly elevated father and shepherd in Christ, His Eminence Metropolitan Serapion, on Tuesday, March 8 at St. Mark Church in Los Angeles.

The reception was attended by almost all of the clergy and many parishioners from the four corners of the Diocese who came to congratulate their father and receive his blessing. After the Prayer of Thanksgiving, there was an Arabic word of congratulations offered by the Hegumen Father Felimon Mikhail outlining the numerous accomplishments of His Eminence in and outside the Diocese and an English word concerning the rank of the metropolitan offered by the Very Reverend Father Dr. John Paul Abdelsayed. In between these words, the blessed deacons of the Diocese chanted hymns honoring His Holiness Pope Abba Tawadros II and His Eminence Metropolitan Serapion. 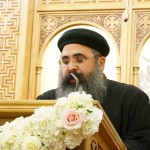 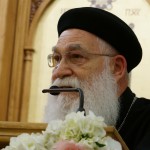 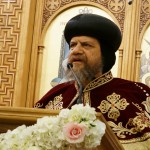 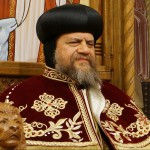 Finally, His Eminence delivered a powerful word about the future of the Diocese in which he was committed to focus even more deeply on the pastoral and social issues in the service. His Eminence also alluded to the need for a succession plan involving the ordination of one or more auxiliary bishops in the Diocese to assist him in delving deeper into aspects such as theological education and social services.

It was an exceedingly joyful evening that marks the beginning of a new chapter in our Diocese’s history.

Bi-Annual Meeting of the Coptic Orthodox Bishops of North America

By the grace of God, the bi-annual meeting of the Bishops of North America was held with the presence of the honored fathers:...

END_OF_DOCUMENT_TOKEN_TO_BE_REPLACED

On the occasion of the inauguration of President Joseph Biden, the Coptic Orthodox Bishops of North America sent a letter with...

END_OF_DOCUMENT_TOKEN_TO_BE_REPLACED

The Clergy of the Diocese of Los Angeles, Southern California, and Hawaii were blessed to have a meeting and audience with His...

END_OF_DOCUMENT_TOKEN_TO_BE_REPLACED

Festal Message for the Glorious Feast of the Nativity 2020/2021

“That the excellence of the power may be of God and not of us” (2 Co 4:7) My Beloved, the Blessed Children of the Holy Church,...