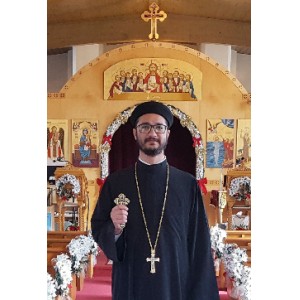 He was born on September 12,1981 in Portsaid, Egypt. He earned a bachelor degree in Pharmaceutical sciences at Ain Shams University, Cairo, Egypt in 2004.

He attended the servant preparation course for 2 years at St. Mary church in El-Nozha El-Gedida, Egypt, then he served as a sunday school teacher for middle school, a deacon and a choir member.

He served at Archangel Michael church in Simi Valley as a sunday school teacher, Hymns teacher and a choir member.

He was ordained by HE Metropolitan Serapion as an Archdeacon on November 24, 2017 at St. Mina, Riverside and then a priest on November 26, 2017 at Archangel Michael Church in Simi Valley.